If anyone sees a scapegoat wandering around Northside, I've been looking for a speckled one. I need someone to blame some stuff on, mostly my lack of blogging. I don't drink enough to take Jamie Foxx's advice and blame it on the A-ah-ah-ah-ah-alcohol. (And if you do not follow that link, your views of Ron Howard will never be enlightened.)

I received three friendly reminders this weekend that my sorry behind had not posted in a month. Oddly enough, I have written three posts but the inner editor nixed them all. They were pretty highbrow as I recall and I swore off that for Spring, and maybe Summer, too. One was on animal research, I recall that much. Did you just spontaneously yawn? Me too.
I have been busy with my social life and happy mindless activities so blogging just has not been an option. Do you have any idea how many years I have waited to say that?!?! It is fantastic. In the past month I have been to an amazing gala celebrating the grand re-opening of the Virginia Museum 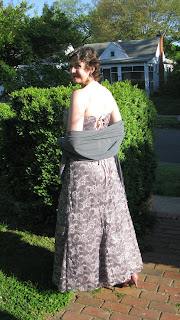 . I had to dismantle and rebuild a very fancy hand-me-down evening gown for that one which took almost a week. Then there was the recovery from the festivities themselves in which some blaming it on the Ah-a-a-a... might be appropriate.
There was a fourth trip to Mississippi to rebuild after Katrina. I now recall that I blogged on that and the editor sent it to the cutting room floor, too.
There was a brief trip to New Orleans that was almost entirely about great food and good beer, but the best part of that story is when a strong-armed stripper zinged me in the neck from a Bourbon St. balcony with a strand of Mardi Gras beads thus hexing me into believing with all my heart and soul that New Orleans is the greatest city in the South. But that hasn't worn off yet, so I am not telling that story.
Then there's my sci-fi book club. I walked into the bar where we meet to discuss this month's book, the American classic The Man in the High Castle and the waitress says, "What are you doing here?!?" because there wasn't a band and it is a touch out of character for me to walk into a bar with a book. I told her I was there for the book club and she looks really confused.
"You mean those g... guys?" I should have said, "No, those geeks," because we all know she was thinking it. The greatest geeks in town are in this book club and I hope to grow up to be just like them. I don't understand 2/3 of their references, but they are very nice about my smiling ignorance. They even let me choose next month's book. They had their doubts with the title, The Sparrow but once I gave the plot in three words they were sold: Jesuits in space.
I have also in the past month gone over to people's houses where they cook food and share it with me and my family. It is amazing and fun and you should try it some time. (I think I have had as many meals with friends in the past month as I would in a year while engaged in my former profession.)
I have played Twister (a major coup for someone with my unique body chemistry.) I have sung in a car for hours with a friend to and from Mississippi. And he survived it. I have brewed beer. I have made graduation presents on my sewing machine and delivered them... ON TIME. I walk the children to and from school. I have been introduced to a disturbing but hilarious sub-genre of music in which white g... guys sing gangsta rap lyrics to re-written music like bluegrass, lounge music, or power ballads.

In other words, I am living a normal social life for an extrovert who took the road less travelled 15 years ago and discovered it led to a place devoid of life beyond work so got a helicopter to pick her up in a meadow and airlift her tail back to the real world so she could try again.

But I have not blogged. And I did have one little slip into old bad habits. I preached a sermon. At least I think I did. It happened pretty quickly and was followed by eating at a friend's house and going to a music festival so I might not have. If I did preach, it was on the ideas of Dawkins, Harris, Dennett, Hitchens, Christian Arnsperger and a naked Alan Greenspan and how they could all use a little gleeful hope in their lives. And if I preached, one thing is for sure: the music was awesome.

I will go back to the cutting room to see if anything can be salvaged from those earlier posts. Thanks for the pants kick from my fans. Always nice to know that someone is reading.

Hope to see you all on a dance floor somewhere soon.

Want Some Jots in Your Box??? Subscribe. I won't tell your mama. Just enter your email here.

The Skinny on Me

The Jotter
Richmond, Virginia, United States
The Jotter is a generally hopeful person perennially faced with seemingly dire or hopeless situations which she confronts by blogging. She is an ordained minister who prefers dance, home brewing, child rearing, laughter, and a really good party to committee meetings or pulpit lip flapping in a scratchy robe. With the right perspective, weddings and funerals qualify as really good parties and she can be hired for those if she likes you ALOT. She will do responsive blogs to serious inquiries of theological, philosophical, or grief related import. Or if she finds you funny.